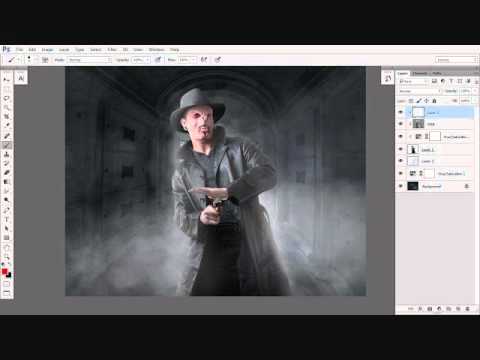 1. Prepare the background
2. use the Adjustment layer Hue-saturation adjust as needed
3. Prepare the model objects that you have downloaded, and the selection and cutting
4. merge model object and background.
5. Create a new layer under layer model objects to create a smoke effect or fogging. use a smoke brush that you have downloaded with opacity 10 s / d 15%. as shown in the picture
6. The results create smoke effects / fogging
7. use the right-click hue-saturation clipping mask
8. use the technique dodge & burn by pressing SHIFT + F5 pad the keyboard, click the clipping mask kana change the blend mode to Softlight and rubbed slowly, in part to be in the dark for the light.
9. The next technique is to create a smoke effect that caused the object surface models create a new layer, use white brush with the opacity of 3%.
10. Gently wipe the parts which if exposed to the effects of smoke.
11. The results of the effect of smoke on the surface of the object
12. The use of brightness and Contrast Adjustment layer as needed.
13. Create a new layer using back brush smoke that you have downloaded.
14. Adjustment use gradient fill layer set as shown in FIG.
15. Adjustment layer using a solid color with the color as you wish
16. Adjustment to use color balance adjustment layer with the color tone of a solid color
17. to make use SOFTONE efffect curve by pulling the bottom curve is upward not to make dark colors become slightly opaque ENDS