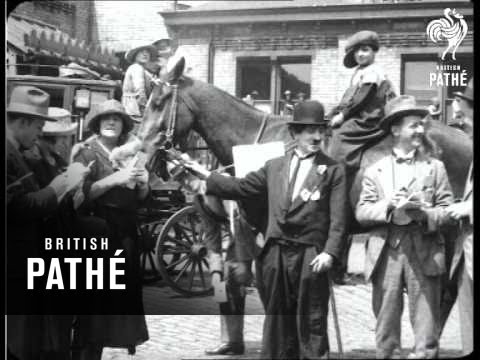 Numerous shots of people standing around in group in fancy dress. In particular a number of men dressed as criminals. Woman walk past displaying a variety of dress and hat fashions. M/S of man dressed as Charlie Chaplin holding horse by the rains, a small boy (or girl ?!) sits in the saddle. L/S’s of the parade in progress, lots of small children dressed as clowns walk past. Also visible is a horse drawn float with the May Queen on. L/S of man walking up step to platform to crown the May Queen. Group shot of the May Queen, and other officials.
FILM ID:270.05